A stunning performance from Foran Equine Rider Bertram Allen and The Irish Sport Horse Pacino Amiro saw them take victory in last Saturday’s $401,000 Lugano Diamonds five-star Grand Prix at the Winter Equestrian Festival in Florida – adding to a string of wins for Irish riders at the stateside venue over the past few weeks.

Only five combinations from the 40 starters made it through to the jump-off, with three of those five coming from Ireland. The first to return for the jump-off were Co Down’s Lorcan Gallagher and VDL Cartello, owned by Heathman Farm, LLC. They had one fence down to finish in fifth place in 38.47 seconds. Immediately following, Allen and the Aiden McGrory-owned Pacino Amiro sped through the course in 35.32 seconds, a time that couldn’t be caught by the remaining three competitors.

“There was no real standard set before I went in because Lorcan obviously had a fence down,” said Allen, “and there were only three coming after me, but they were obviously three very, very good ones on fast horses. I know my guy is fast, and with only five in it, the worst case I was fifth. I was going to give it a good shot, and thankfully it came off.”

In a class stacked with Irishmen, it was Daniel Coyle and Ariel Grange’s Legacy, an 11-year-old mare, who came closest to Allen’s leading time. They were clear in 37.11 seconds to finish in second place.

“Anything Bertram does in the jump-off is usually hard to follow or catch,” said Coyle. “I knew before I went in that was going to be a challenge so I just stuck to my own plan and if it was good enough, great, and if not, there will be lots more. It’s Legacy’s first class under the lights this year, and I always have huge, huge expectations of her.”

Mario Deslauriers (CAN) and Bardolina 2 were clear in 37.62 seconds for third place, just ahead of Daniel Deusser (GER) and Killer Queen VDM with one fence down in 35.62 for fourth place. 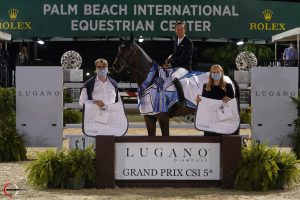 Allen and Pacino Amiro, who led the victory gallop during WEF 2 in the Adequan® WEF Challenge Cup, were riding in only their second five-star Grand Prix under the lights. It was an impressive finish for the nine-year-old Irish Sport Horse gelding by Pacino x NC Amiro, who was also in the jump-off during the WEF 5 five-star Grand Prix.

“The last Grand Prix I suppose I was stepping into the unknown a little bit with him,” admitted Allen. “He had never jumped a five star or been under the lights, and he handled it very well. Tonight, I was a bit more confident that I knew that he could do it, so I was just hoping that he was going to be on form. He was even better again tonight.”

Allen has been riding Pacino Amiro since he was seven years old and developed him as a young horse. “He’s a little bit of a special character, and I know him very, very well,” he described. “Since week one he’s gotten better and better, and he is a lovely horse who wants to try his best all the time and learn.”