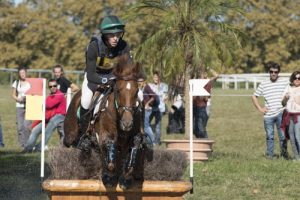 The FEI World Equestrian Games, held every four years in the middle of the Olympic cycle, is one of the biggest events on the global sporting calendar. Team and individual World Championship titles are up for grabs in eight FEI disciplines – Jumping, Eventing, Dressage, Para-Dressage, Driving, Endurance, Vaulting and Reining.

The Irish Eventing Squad for the 2018 FEI World Equestrian Games is:

Five reserves have also been named in the following order:

All combinations are required to maintain their current form and soundness to remain on the squad for the Championships.
Speaking after announcing the squad, Irish Eventing Team Manager Sally Corscadden said:

“It is very exciting to be travelling with a squad that has achieved competitive individual performances at four-star and Championship level. Our job is to progress this into a competitive team result and a qualification for the 2020 Tokyo Olympics. Our Eventing squads have consistently  produced top class results at a broad range of three and four-star Internationals this spring, including a podium finish in the Nations Cup at Houghton Hall, and three riders finishing in the top 10 at four-star level.

“It has been the most successful start to the year for Team Ireland on the competition front, however the thoughts and prayers of all the team remain with Jonty Evans following his fall. He is always in our thoughts and we will definitely be “wearing green for Jonty”. We would like to thank our coaches, the squad members, their owners and supporters for all their hard work behind the scenes. We would also like to thank everyone who supported us at our fundraising Demo Nights and Race and also all our Team Ireland Equestrian Sponsors. It is a huge benefit to be able to send the team with the proper training, support and preparations in place to help them to perform to the best of their ability and make Ireland proud.”

The 2018 FEI World Equestrian Games runs from September  11th to 23rd with the Eventing competition starting with Dressage on September 13th & 14th, followed by Cross Country on September 15th and the final Show Jumping phase on September 16th.